The southwestern states of the USA are host to some of the world’s largest and most prolific porphyry copper deposits. Typically the ores are moderate, but their exceptional scale result in them being the most economical to develop. The Copper Flat Project is located in the historic Hillsboro mining district of New Mexico, USA. Following the discovery of placer gold and silver deposits in the late 1870’s, it was one of the first districts to be mined. For a century, silver and gold was produced from placer operations in the vicinity of the Copper Flat Project. 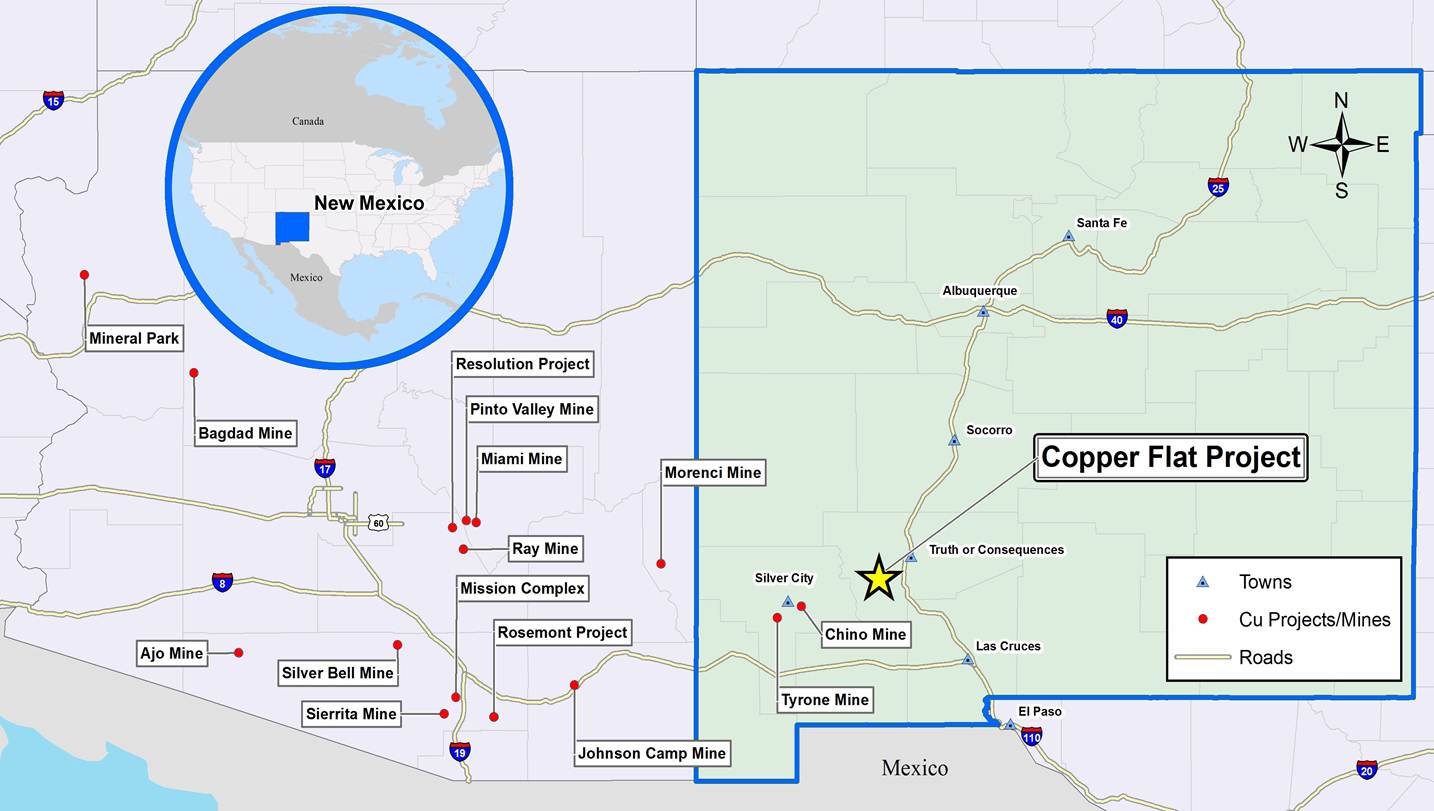 The first copper smelter was developed in the town of Hillsboro in 1892 and operated until the early 1900s. Small-scale copper and precious metal mining continued in the district until 1941. Between the 1950-1960s majors such as Newmont Mining Company (Newmont) and Bear Creek Mining Company (Kennecott’s former exploration subsidiary) became involved in the district, and had varying exploration exposure to the project area.

In the past 30 years there have been two significant efforts to bring the Copper Flat mine into production. The first effort was by Quintana Minerals who successfully achieved production in 1982 following a $112M capital investment. With a capacity of 15,000 st/d and a waste ore ratio of 1.8:1 the mine ran in full production for three and a half months. Financed on a $1.70 /lb copper prices the company was unable to sustain the low copper prices of $0.70/lb. Coupled with this were the high interest rates on the CIBC (Canadian Imperial Banking Corporation) loan. The mine was put on care and maintenance in the expectation that it would be reopened once there was an economic rise in copper prices. Eventually the mine was dismantled prior to a copper recovery and the concrete foundations were covered.

The initial mining in 1982 proved that there are no adverse processing factors or harmful by products which would require additional engineering and environmental control. With a change in copper prices, modern extraction techniques, and successful management, it is evident that there is significant production potential at Copper Flat.

The second effort was with Alta Gold which acquired the property in 1994. Having obtained a draft final EIS for the project in 1999, the company went bankrupt (following financial difficulties with other assets) just prior to the final issue of permits.

Alta’s exploration, engineering and environmental studies contributed significantly towards the development of the Project. Resource and environmental data was progressed to standards consistent with current regulations. The work carried out in the 1990s further underpins the economic and operational viability of the Copper Flat Project.