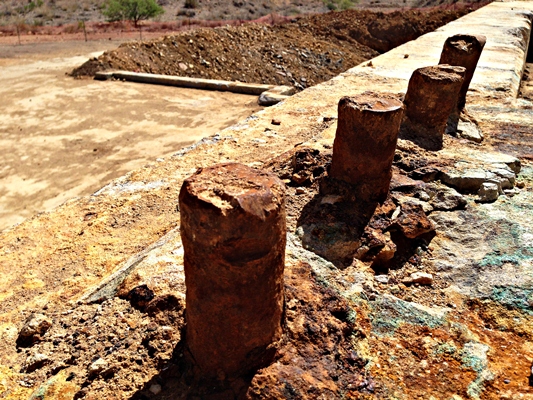 Copper Flat is a former producing mine located in Sierra County, New Mexico, USA, approximately 150 miles south of Albuquerque and 20 miles southwest of the town of Truth or Consequences, New Mexico. The project land package comprises 4,741 acres, with the majority of the mineral reserves located on patented mining claims that are wholly-owned by THEMAC.

The Report summarizes the results of a feasibility study on the Copper Flat copper-gold project, which results were first reported by the Company in a news release dated October 7, 2013. The Report was prepared by M3 Engineering & Technology Corporation.

The Report is available on SEDAR (www.sedar.com) and is also posted on the Company’s website (www.themacresourcesgroup.com). All amounts below are in United States Dollars and all quantities are presented in US standard units unless stated otherwise.

The financial return table below is after tax, unlevered and with no escalation in commodity prices.

“I would like to thank all involved for their efforts in to completing an excellent study. We are pleased that the results indicate Copper Flat is a viable project. Now that the feasibility is complete, we will be focusing on progressing engineering design works and gaining the remaining permits required
to develop the mine.” said Andrew Maloney, CEO.

Copper Flat’s proven and probable mineral reserves increased by 15%, or 15 million tons, to 113.1 million tons, when compared to the previous 2012 mineral reserve. This material contains 675 million pounds of copper, 20 million pounds of molybdenum, 340 thousand ounces of gold and 6.8 million ounces of silver, and has an average copper equivalent grade of 0.39%. Copper equivalent factors used account for metal price, metallurgical recovery and smelter payable factors. Listed below are Copper Flat mineral reserves and mineral resources as of April 2, 2013.


The mineral reserves and mineral resources have been developed from a computerized block model that is based on a drill hole database incorporating a total of 233 drill holes and 181,326 feet of drilling that continued through to the end of 2012. In addition to the drilling program, the company re-assayed more than 6,000 historical pulps to obtain gold and silver data. The mineral reserve has benefited from additional geotechnical drills holes that allowed the pit wall slopes to steepen due to improved rock conditions.

The total initial capital cost for construction, mine per-development, commissioning and owner’s cost is estimated to be $360.5 million. Sustaining capital will total $63 million over the life of the operation.

The project is a brownfield redevelopment project in a stable region with excellent access to existing infrastructure. The project will realize savings through the reuse of significant infrastructure that remains from the original Quintana Mine, which provides an estimated $53.9 million in value to the Project.

Copper Flat is a porphyry copper-gold deposit that is located in close proximity to the surface and amenable to open pit mining methods. The pit operations are planned to use standard mining equipment, including: 45,000 lb., single pass rotary blast hole drills, 19-cu-yd front-end loaders, and 100 ton off-highway haul trucks. The Mine plan includes a mine support fleet comprised of track and rubber-tired dozers, motor graders, and 10,000-gallon water trucks. Material mined totals 158 million tons of ore and waste over the life-of-mine at an average stripping ratio of 0.40 tons of waste per ton of ore. The mining rate peaks at 17.5 million tons of total material per year.

The construction program benefits from the use of existing infrastructure and the timeframe expected to construct and commission the project is estimated to require 18 months. Following construction, the project schedule includes 11.1 years of ore processing and four years for reclamation and closure.

Ore will be processed through a standard crushing, grinding and sulfide flotation concentrator to produce a copper-gold-silver concentrate and a molybdenum concentrate. The Copper Flat concentrator is scheduled to process 10.8 million tons per year for the first five years of production and 9.9 million tons per year for the remainder of the mine life when harder ores are encountered at depth in the deposit. Copper recovery to concentrate is projected to average 70 million pounds per year during the first five years of operation and 57 million pounds per year when averaged over the full life-of-mine.

The Copper Flat ore lends itself to common crushing and grinding practice and standard flotation reagents and the mill is designed to have a simple gyratory crusher and SAG/ball mill grinding circuit followed by a conventional floatation circuit to produce separate copper and molybdenum concentrates. Metallurgical testing shows the Copper Flat ore contains coarse gold that is recoverable through physical separation and gravity separation equipment, this equipment is included in the process flow sheet to improve gold recovery. As a result of metallurgical test work, the expected life-of-mine process recoveries are projected to be: 93.1% copper; 78.0% molybdenum; 73.7% gold; and 82.7% silver.

The complete Feasibility Study National Instrument (“NI”) 43-101 TechnicalReport has been filed on SEDAR at www.sedar.com and is also be available on the Company’s website at www.themacresourcesgroup.com

The feasibility study was prepared by M3 Engineering & Technology Corporation of Tucson, Arizona, under the supervision of Conrad Huss, P.E., an Independent Qualified Person as defined under Canadian NI 43-101. M3 Engineering & Technology Corporation (M3) provides professional EPCM services and is now recognized as an industry leader in Feasibility Studies and associated NI 43-101’s.

Mineral resources and reserves were calculated by IMC of Tucson, Arizona under the supervision of John Marek, P.E., IMC President, an Independent Qualified Person as defined under Canadian NI 43-101. Since 1983 Independent Mining Consultants, Inc. (IMC) has been recognized worldwide for its expertise in Open Pit Mine Design and Mine Planning as well as Ore Reserve Estimation and Mineral Economics. IMC has worked for large international mining conglomerates, medium sized mines, multiple commodity producers, and exploration firms.

Engineering and design of the tailings storage facility for Copper Flat was prepared under the supervision of Gene Muller, P.E., an Independent Qualified Person as defined under Canadian NI43-101. Employee owned since being founded in 1960, Golder Associates Inc. provides engineering and environmental consulting services to mining, energy and natural resource industries. Golder has conducted similar studies and engineering evaluations in the southwestern US and internationally.

The mine reclamation plan and closure cost estimate was developed by SRK Consulting (U.S.), Inc. under the supervision of Mark A. Willow, SME-RM, an Independent Qualified Person as defined under Canadian NI 43-101. Originally formed in 1974, SRK is an independent, international organization that provides professional consulting services and expert advice, mainly in the fields of mining, geotechnics, water, waste, and the environment. SRK services clients across a range of industries that are primarily natural resource development oriented.

Standard procedures for core handling were in place during the entire drilling program, and a geologist was on site for all sample preparation and shipping.

Assaying for the 2012 drilling program was undertaken at the Skyline Laboratory in Tucson, AZ. Copper and molybdenum values were determined by ICP/MS, gold by fire assay with AA finish, and silver by AA. Reference standards and blanks were inserted in the sample streams, and every tenth sample is being objectively validated by ALS Minerals, Reno, Nevada using similar methodologies.

An Appendix of tables and figures for this news release is available on THEMAC’s website at www.themacresourcesgroup.com.

THEMAC is a copper development company with a strong management team which acquired the Copper Flat copper-molybdenum-gold-silver project in New Mexico, USA in May 2011. We are committed to bringing the closed copper mine, Copper Flat, in Sierra County, New Mexico back into
production with innovation and a sustainable approach to mining development and production, local economic opportunities and the best reclamation practices for our unique environment. The Company is listed on the TSX Venture Exchange (ticker: MAC) and has issued share capital of 75,300,122 common shares (fully diluted share capital 133,330,134).

Certain information contained or incorporated by reference in this press release, including any information as toTHEMAC’s future financial or operating performance, the likelihood and timing of commercial production, construction of plant, and obtaining required permits, statements with respect to the estimation of mineral resources and reserves, expanding mineral reserves and mineral resources, the realization of mineral reserve and mineral resource estimates, the timing and amount of estimated future production, capital costs, costs of production, metal or mineral recoveries, mine life and production rates, capital expenditures and success of mining operations, expected IRR and NPV constitute “forward-looking statements”. All statements, other than statements of historical fact, are forward-looking statements. The words “believe”, “expect”, “anticipate”, “contemplate”, “target”, “plan”, “intends”, “continue”, “budget”, “estimate”, “may”, “will”, “schedule” and similar expressions identify forward-looking statements. Forward-looking statements are necessarily based upon a number of estimates and assumptions that, while considered
reasonable by THEMAC, are inherently subject to significant business, economic and competitive uncertainties and contingencies. Such assumptions include the specific assumptions set out in this press release and in the Report, that future capital and operating costs will be in line with THEMAC’S assumptions, that mineral resource and mineral reserve estimates prove accurate, permits required to commence production will be obtained on a timely basis, copper, molybdenum, gold and silver prices will remain consistent with THEMAC’s expectations, that there are no
changes in THEMAC’s development plans as new information is received, that THEMAC will be able to access financing, equipment and sufficient labour to carry out its planned business. Known and unknown factors could cause actual results to differ materially from those projected in
the forward- looking statements. Such factors include, but are not limited to: fluctuations in the currency markets; fluctuations in the spot and forward price of copper, molybdenum, gold, and silver; volatility in the price of fuel and electricity; changes in national and local government legislation, taxation, controls, regulations and political or economic developments in Canada and the USA; business opportunities that may be pursued by THEMAC; operating or technical difficulties in connection with mining or development activities; employee relations;
litigation; the speculative nature of exploration and development, including the risks of obtaining necessary licenses and permits; uncertainty surrounding the availability of water rights required for mining operations which, if not secured, could result in changes to the proposed plan for development of Copper Flat; contests over title to properties, particularly title to undeveloped properties; failure of processing and mining equipment to perform as expected; labor disputes; supply problems; uncertainty of production and cost estimates; the interpretation of drill results; the assumptions upon which the estimation of mineral resources and reserves prove inaccurate, which could lead to a restatement of reserves and resources;; changes inproject parameters as plans continue to be refined; possible variations in ore reserves, grade of mineralization or recovery rates may differ from what is indicated and the difference may be material; legal and regulatory proceedings and community actions; accidents, title matters; regulatory restrictions; permitting and licensing; volatility of the market price of Common Shares; insurance; competition; and hedging activities. In addition, there are risks and hazards associated with the business of exploration, development and mining, including environmental hazards, industrial accidents, unusual or unexpected formations, pressures, cave - ins, flood