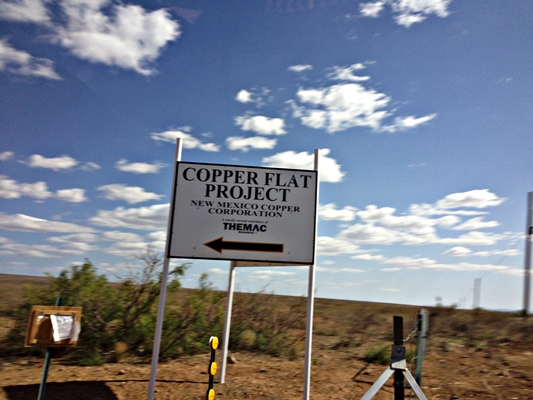 THEMAC, through its subsidiary New Mexico Copper Corporation, is seeking approval from the BLM to bring the closed copper mine, Copper Flat, located near Hillsboro, New Mexico, back into production. The 2,190-acre project requires access to BLM-managed public land and private property, for the production of copper, gold, silver, and molybdenum. The Draft EIS presents the mine plan for the proposed re-start of Copper Flat as well as two alternative mine plan scenarios and evaluates the environmental impact of the proposed action alternatives.

Since the kickoff of the National Environmental Policy Act (NEPA) mandated Environmental Impact Statement process in January of 2012, the BLM has reviewed the proposed mining plan and alternatives as well as the results of environmental studies and surveys in the area regarding air quality, climate, geologic setting, ground water, soils, surface water, vegetation, wildlife, and a number of other topics. The Draft EIS presents BLM’s findings regarding the potential environmental impacts of the proposed re-start of Copper Flat Mine for public review and comment.

Should the Copper Flat Mine be brought back into production it is expected to provide a significant economic boost to the state of New Mexico and Sierra County through job creation and tax revenues. If construction proceeds, we expect the Project would create approximately 1,300 direct, indirect and induced jobs. Once in operation, the proposed Copper Flat Mine is expected to generate approximately 250-275 direct jobs. The estimated total tax paid over construction and the mine life is approximately $175 million; $53 of which will go to the state of New Mexico.

“The release of the Draft EIS is an important milestone for the proposed Copper Flat Mine.” said CEO Andrew Maloney. “We are pleased to have reached this stage and to advance the permitting process for Copper Flat in accordance with Federal and State regulations.”

With the release of the Draft EIS, the BLM is commencing a 45-day comment period. The comment period will end on January 19, 2016. Members of the public will have the opportunity to learn about and comment on the proposed Project at two public meetings in New Mexico.

The Draft EIS can be viewed at www.blm.gov/nm/copperflateis along with information for submission of comments and public hearings.

The qualified person under NI 43-101 responsible for the review of the technical content of this news release is Mr. Jeffrey Smith, P.E., Chief Operating Officer of the Company.

THEMAC is a copper development company with a strong management team and as of May 18, 2011, a 100% ownership interest in the Copper Flat copper-molybdenum-gold-silver project in New Mexico, USA. We are continuing to advance the closed copper mine, Copper Flat, in Sierra County, New Mexico toward production with innovation and a sustainable approach to mining development and production, local economic opportunities, and the best reclamation practices for our unique environment. The Company is listed on the TSX Venture Exchange (ticker: MAC) and has issued share capital of 79,400,122 common shares (fully diluted share capital 142,295,727).

Cautionary Note on Forward-Looking Information. This news release includes forward looking statements and information. Forward looking information can be identified by words such as ‘estimate’, ‘expect’, ‘anticipate’, ‘believe’, and similar expressions are intended to identify forward-looking statements, and in this news release include statements: regarding the economic impact of the Copper Flat Mine to the State of New Mexico; statements regarding our intention to continue with permitting, and statements regarding our intention to bring the Copper Flat Mine back into production. Such statements are used to describe management’s future plans, objectives, expectations and goals for the Company and the Copper Flat Project, and, therefore, involve inherent risks and uncertainties. The Company’s plans and expectations for the Copper Flat Project are based on the assumptions made in the feasibility study entitled “Copper Flat Project – Form 43-101 Technical Report Feasibility Study” dated “November 21, 2013” available on SEDAR, and in the socioeconomic study prepared by the Company and available on the Company’s website, included the estimates of cost and timeframes set out therein. The Shareholders and prospective investors should be aware that the forward-looking statements are subject to known and unknown risks, uncertainties, and other factors that could cause actual results to differ materially from those suggested by the forward-looking statements, including those risks and uncertainties set out in the Company’s management discussion and analysis for period ended September 30, 2015. Readers are cautioned not to place undue reliance on forward-looking information. The Company undertakes no obligation
to update publicly or otherwise revise any forward-looking information whether
as a result of new information, future events, or such factors which affect
this information, except as required by law.